With your child, design a meal that mimics what characters eat in a favorite book. Whether it is stone soup, green eggs and ham, or milk and cookies, have a real or pretend meal that involves your child helping you cook.

By living out the pages of a book, you are helping to bring a story to life. Plus you are encouraging your child’s imagination.

Let your child help you set the table and prepare the feast. Don’t worry too much about accuracy. Take a picture of your child enjoying the meal and keep it on your refrigerator. It will be a meal to remember!

Yesterday my daughter asked me about books that I could recommend for my nearly four-year-old granddaughter that would be helpful for addressing racism. My response was that, for a very young child, the first thing to keep in mind is to offer books that normalize diversity.

Previous generations, including mine, had books that primarily featured White people— families, children, and friends. So that became the norm. Other people were just that ... other.

Thankfully, publishers, authors, educators have woken up to the need to populate children’s books with a range of characters. One significant effect is to help children who are members of minority groups to identify with the characters on the pages. Another effect is to “normalize” the presence of a range of people. When young children see the pages of their books populated with all kinds of people—Black, White, Brown, in a wheelchair, and so on—they internalize the notion that there is not one “type” of person that is the norm.

The following are some books that I am very familiar with because I have incorporated them into literacy programs that I have developed for Scholastic Inc.  These books are populated with diverse human characters.

All Kinds of Friends by Shelley Rotner and Sheila M. Kelly
Everywhere Babies by Susan Meyers
A Good Night Walk by Elisha Cooper
Happy in Our Skin by Fran Manushkin
I Got the Rhythm by Connie Schofield-Morrison
Last Stop on Market Street by Matt de la Pena
Little Red and the Very Hungry Lion by Alex T. Smith
Lola Reads to Leo by Anna McQuinn
Ming Goes to School by Deirdre Sullivan
One Family by George Shannon
One Love by Cedelia Marley
One World, One Day, by Barbara Kerley
The Paper Crane by Molly Bang
Soup Day by Melissa Iwai
You Hold Me Up by Monique Gray Smith
Posted by madforreading at Friday, June 05, 2020 0 comments

Things have changed. Everyone is adapting to a new normal. Parents and educators are trying to figure out how to best keep children engaged, calm, and open to learning. There are no easy answers.

Parents who normally try to limit "screen  time" for their young children are struggling. As they juggle child care, work from home, and all the new and intense emotions that accompany a pandemic, this is a time to be flexible.

These are extreme times.

Choose the best options you can for your child. There are no easy answers. We are all in this together.
Posted by madforreading at Monday, May 04, 2020 0 comments

There are all kinds of readers. Some—like my daughter and me—are never without a book to read for pleasure. Others—like my son—are careful, analytical, and curious readers who read primarily to seek information from the page.

No matter what kind of reader your child becomes, you can help him or her get started. After all, you are your child’s first teacher. And, best of all, you can have some fun in the process.

Please feel free to share your own ideas. Tell me about ways you've enjoyed reading with your child.

Meal in the Making 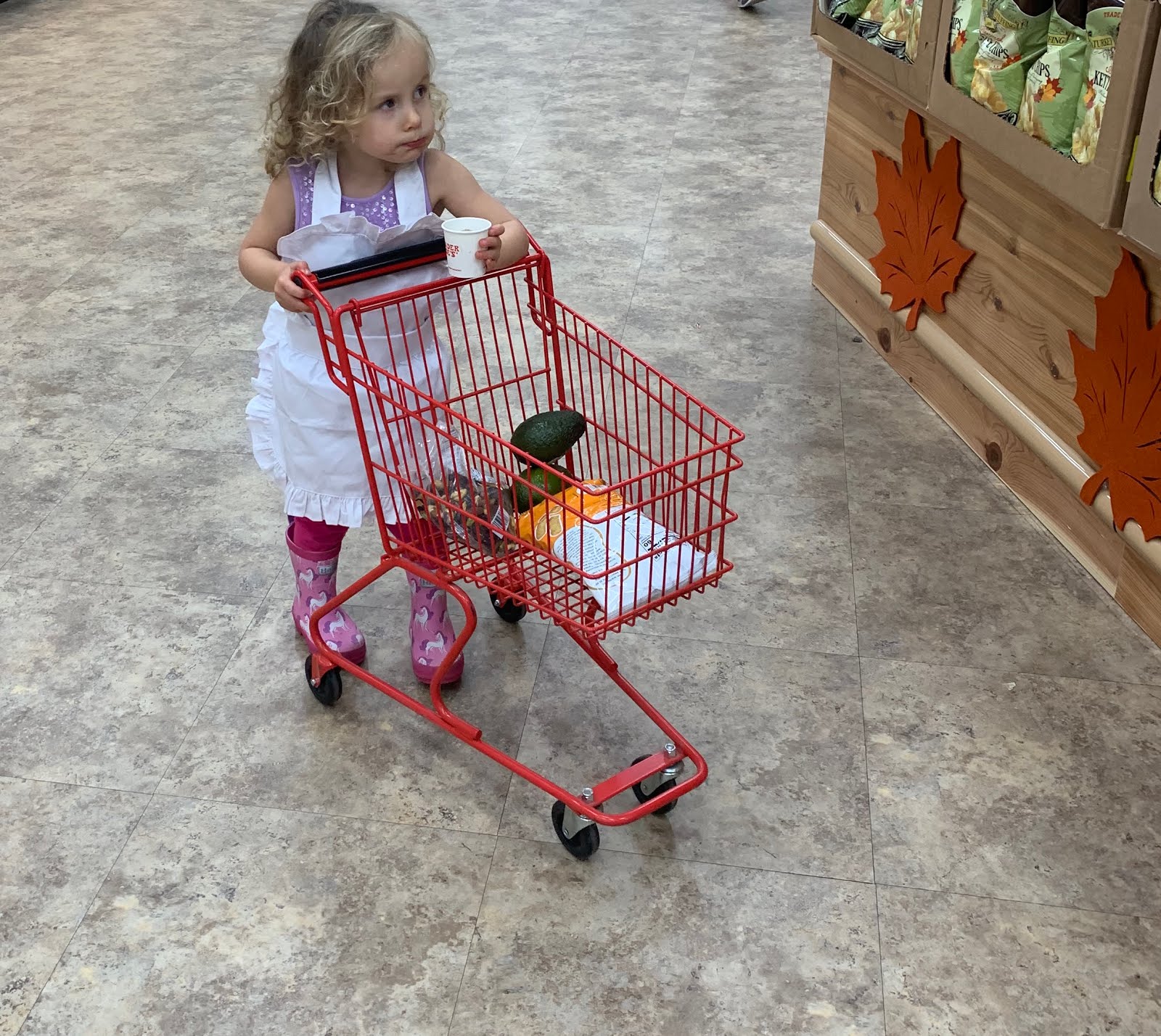 Inspired by the book Soup Day by Melissa Iwai, Marin shops for produce. 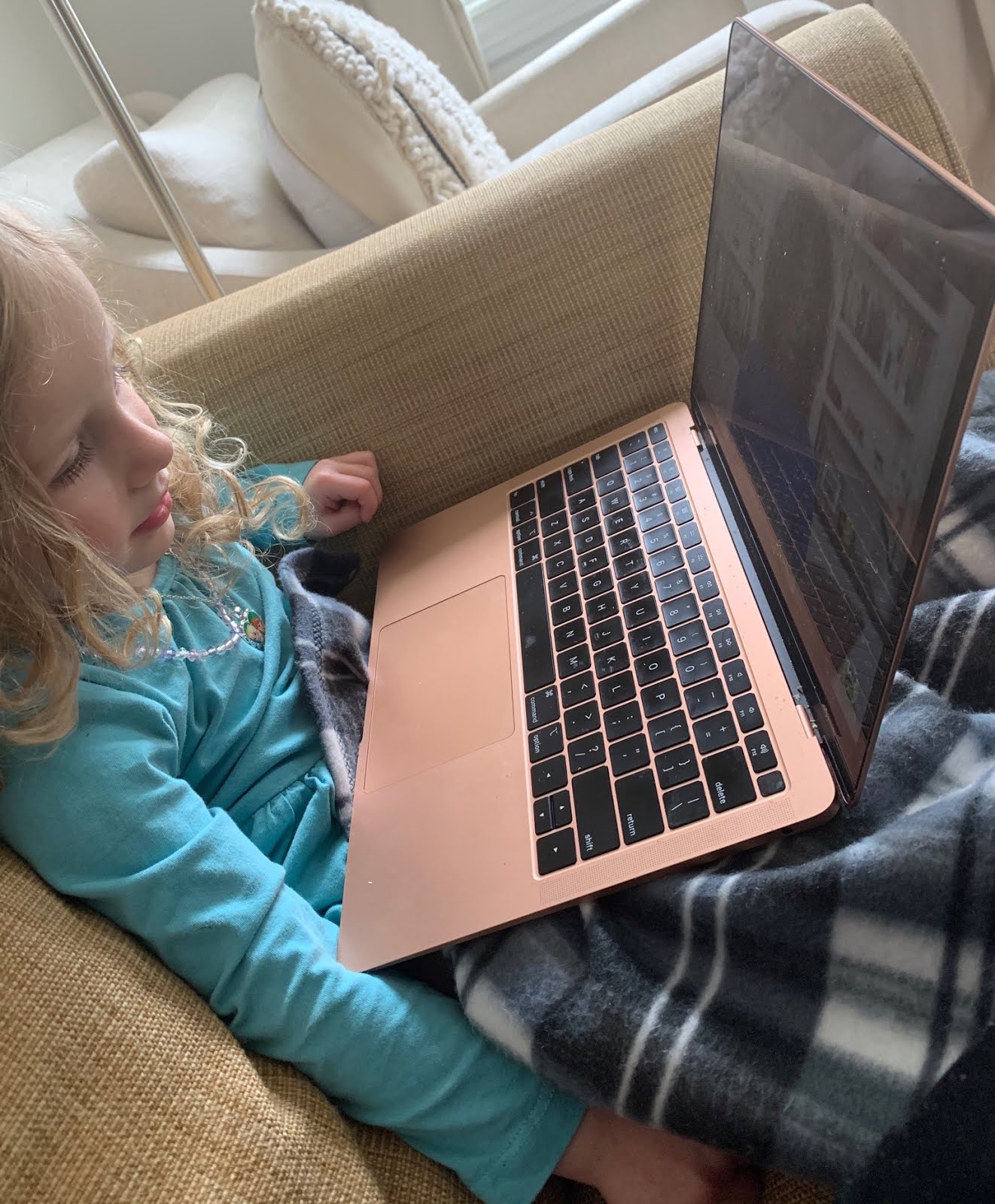 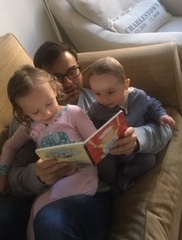 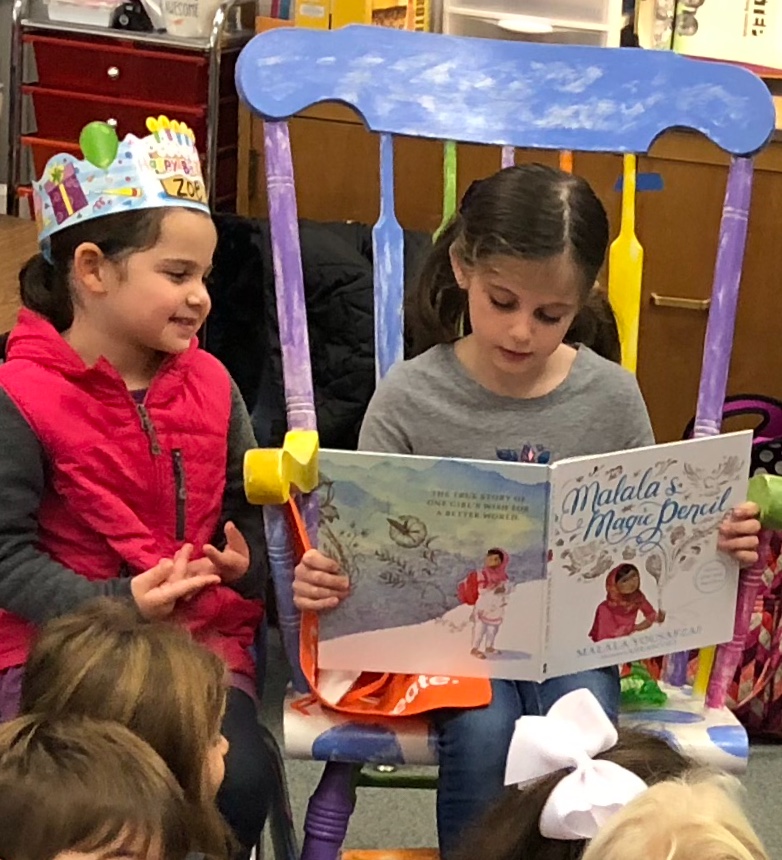 Marin, 22 months, enjoys getting mail from her Baba.

Grandpa Walter and Kayley, 27 months old, read about life under the sea. 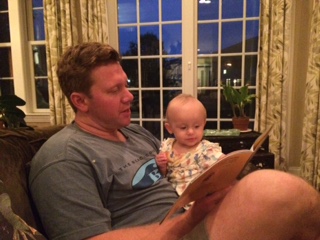 One-year-old Marin and her dad enjoy a book together. 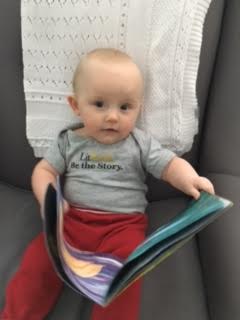 Marin, seven months, takes a book into her own hands. 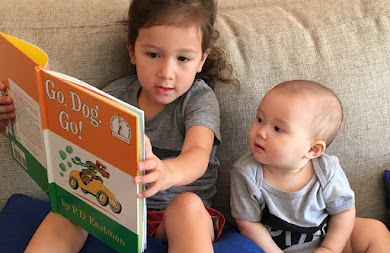 Have Wheels, Will Read! 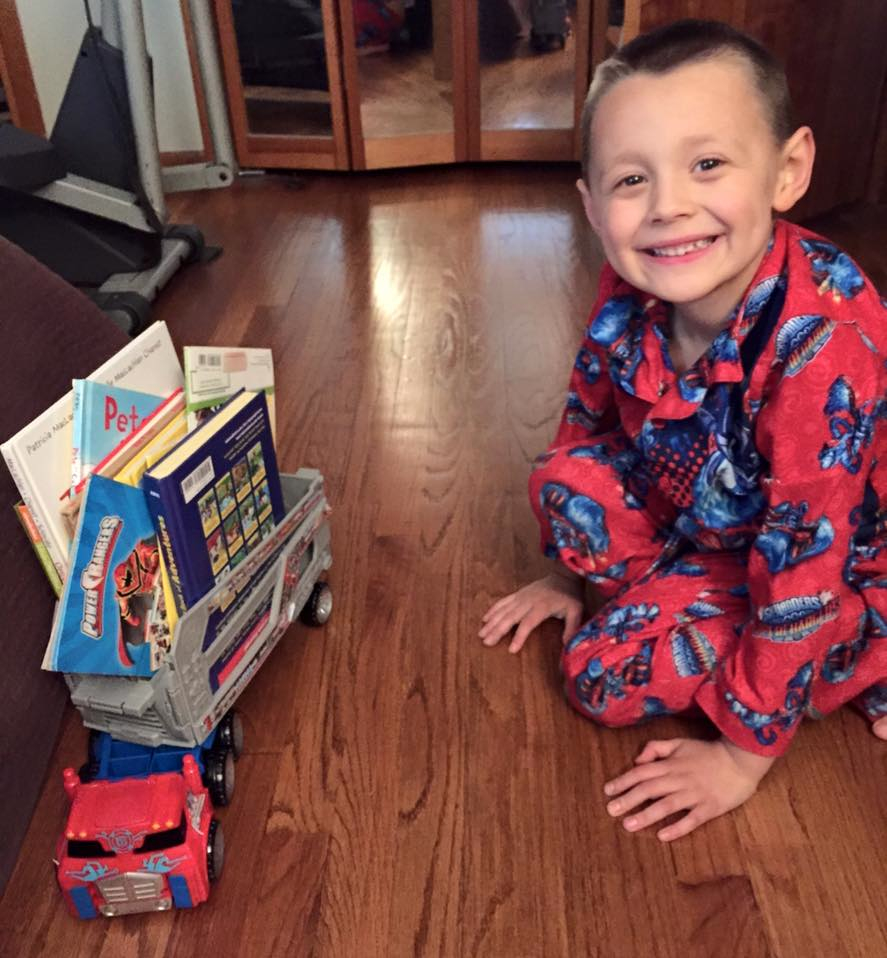 Ryan, age six, loves to read. And to make sure his books are wherever he is, he hauls them in his truck. 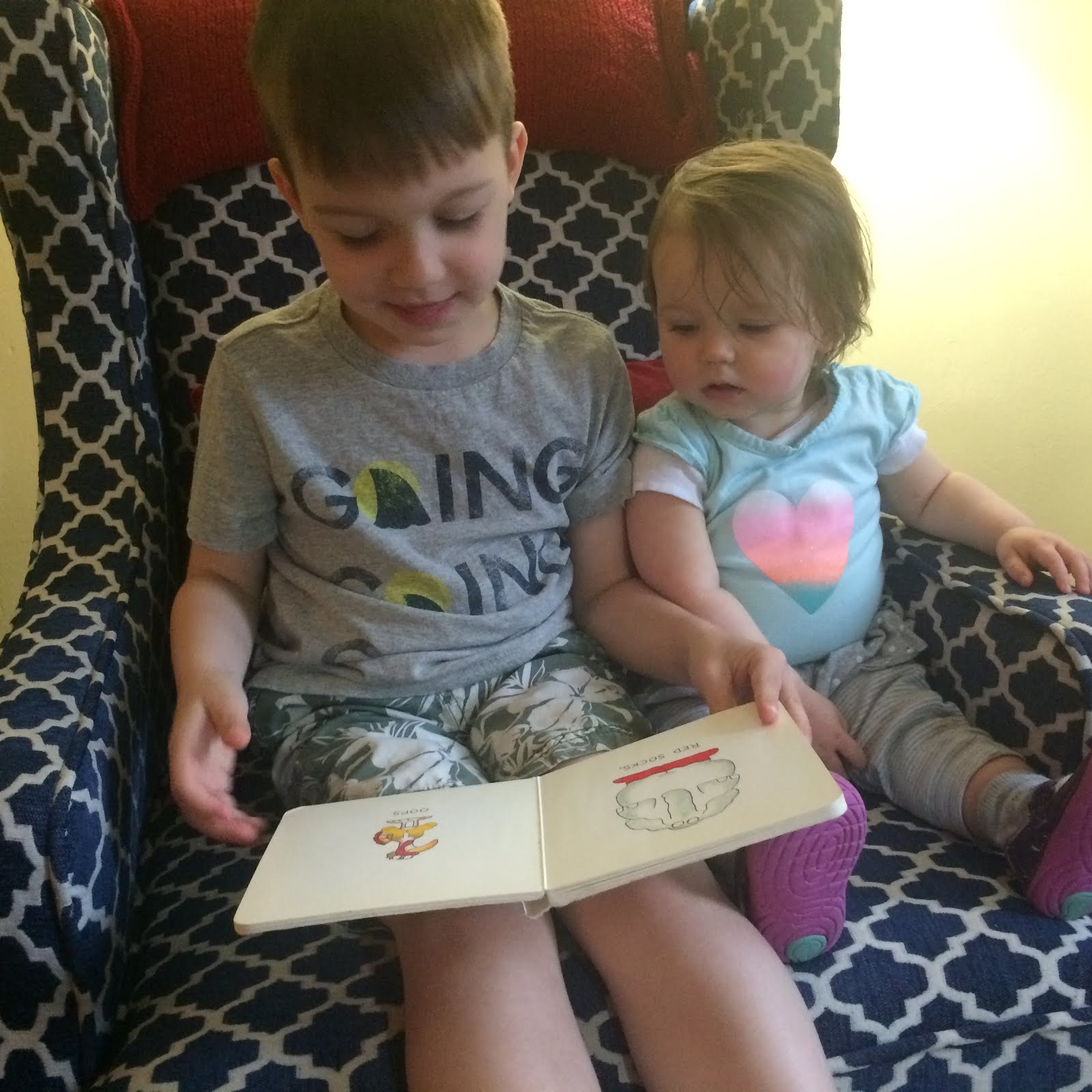 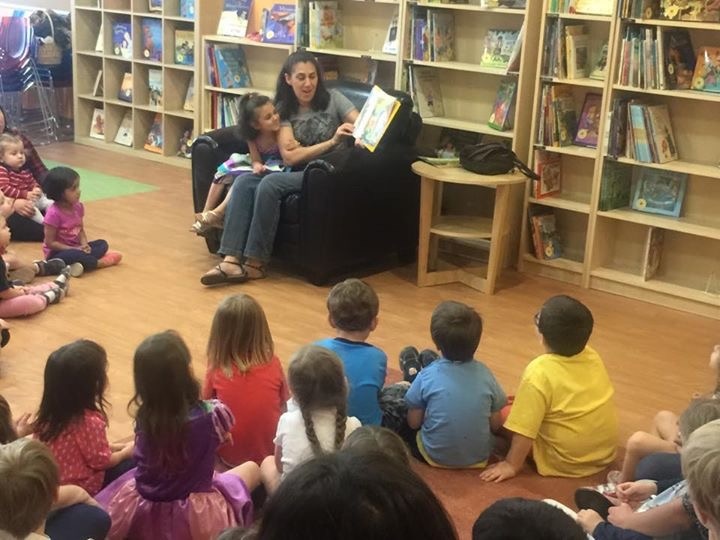 Mila's mom visits school to do a read aloud. 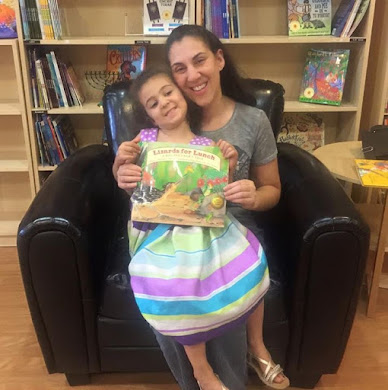 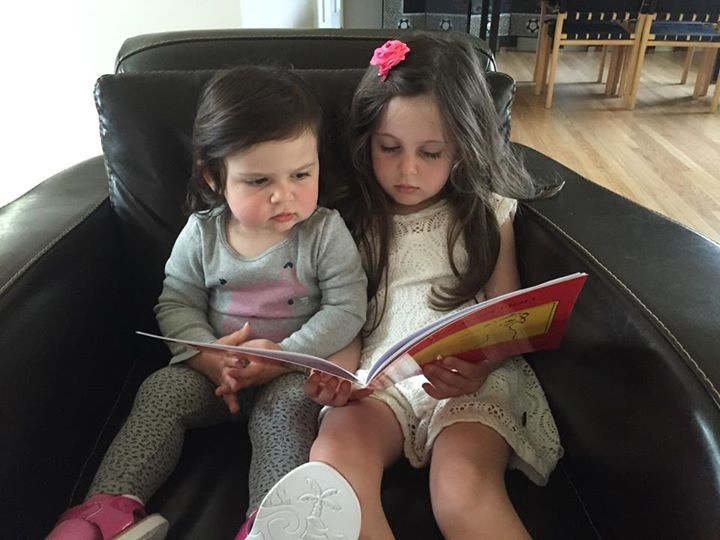 A Quiet Moment in an Active Day 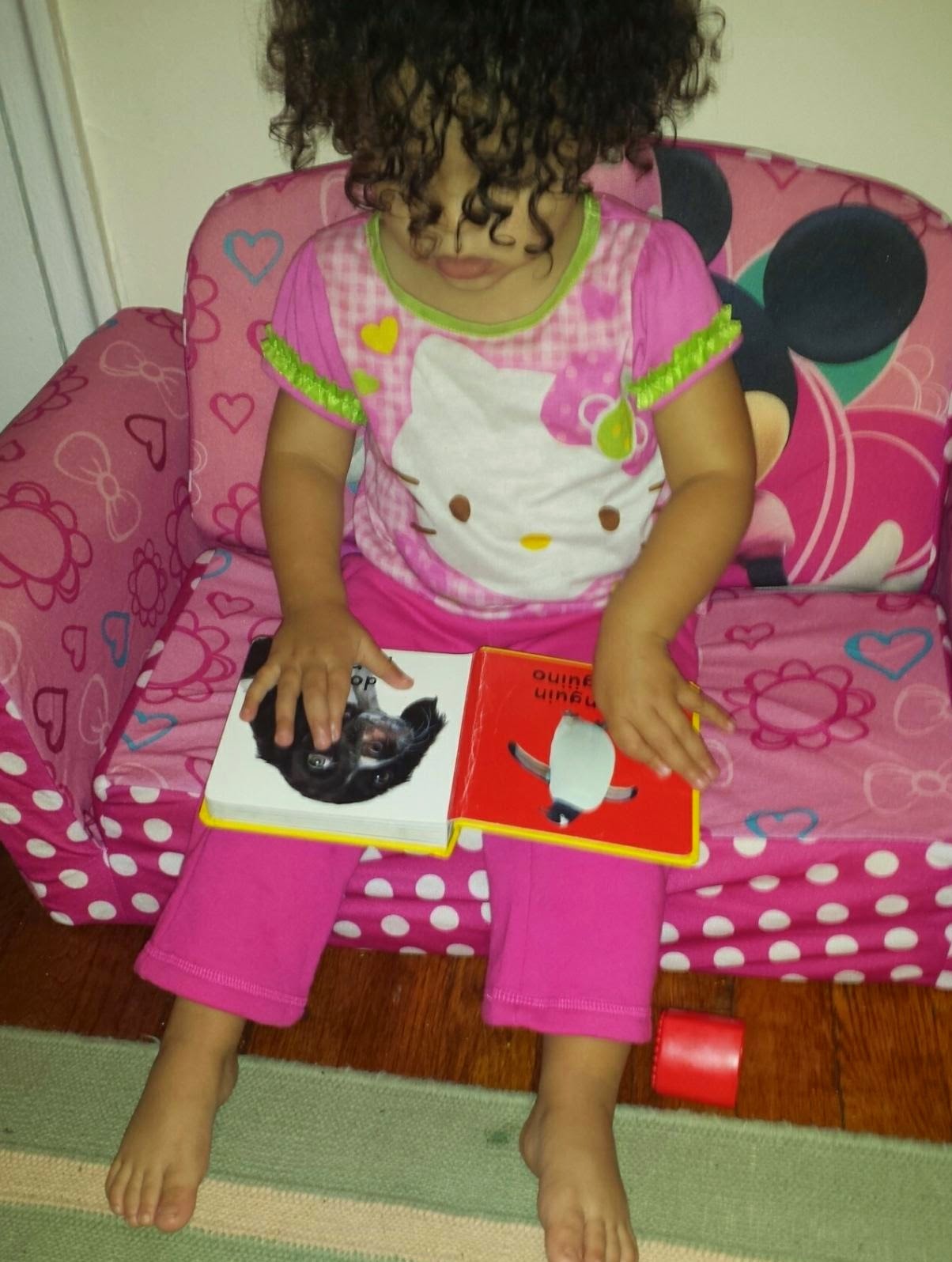 Rose, age 18 months, reads about all kinds of animals. 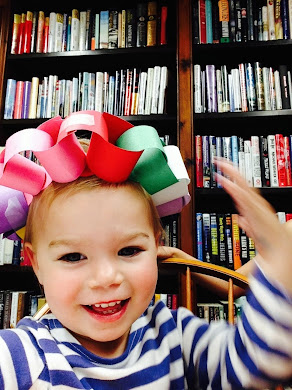 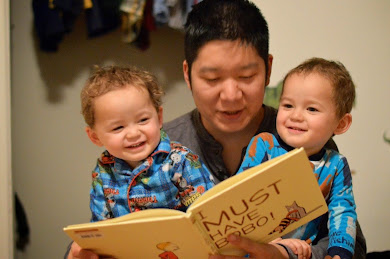 Sam and Ben, two-a-half-year-old twins, sharing a laugh with their dad. 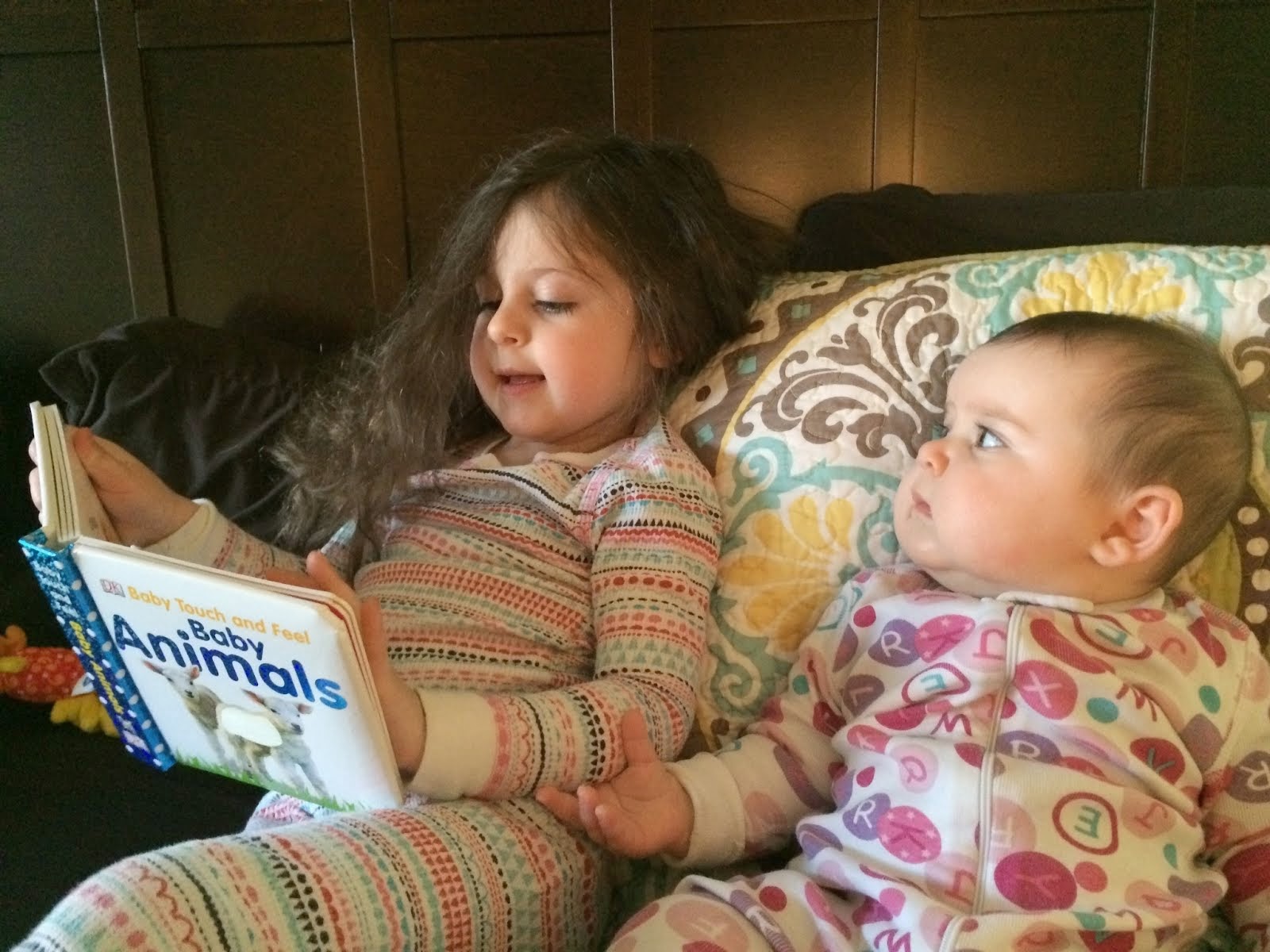 Big sister Mia, three and a half, reads to Zoe, nearly six months. 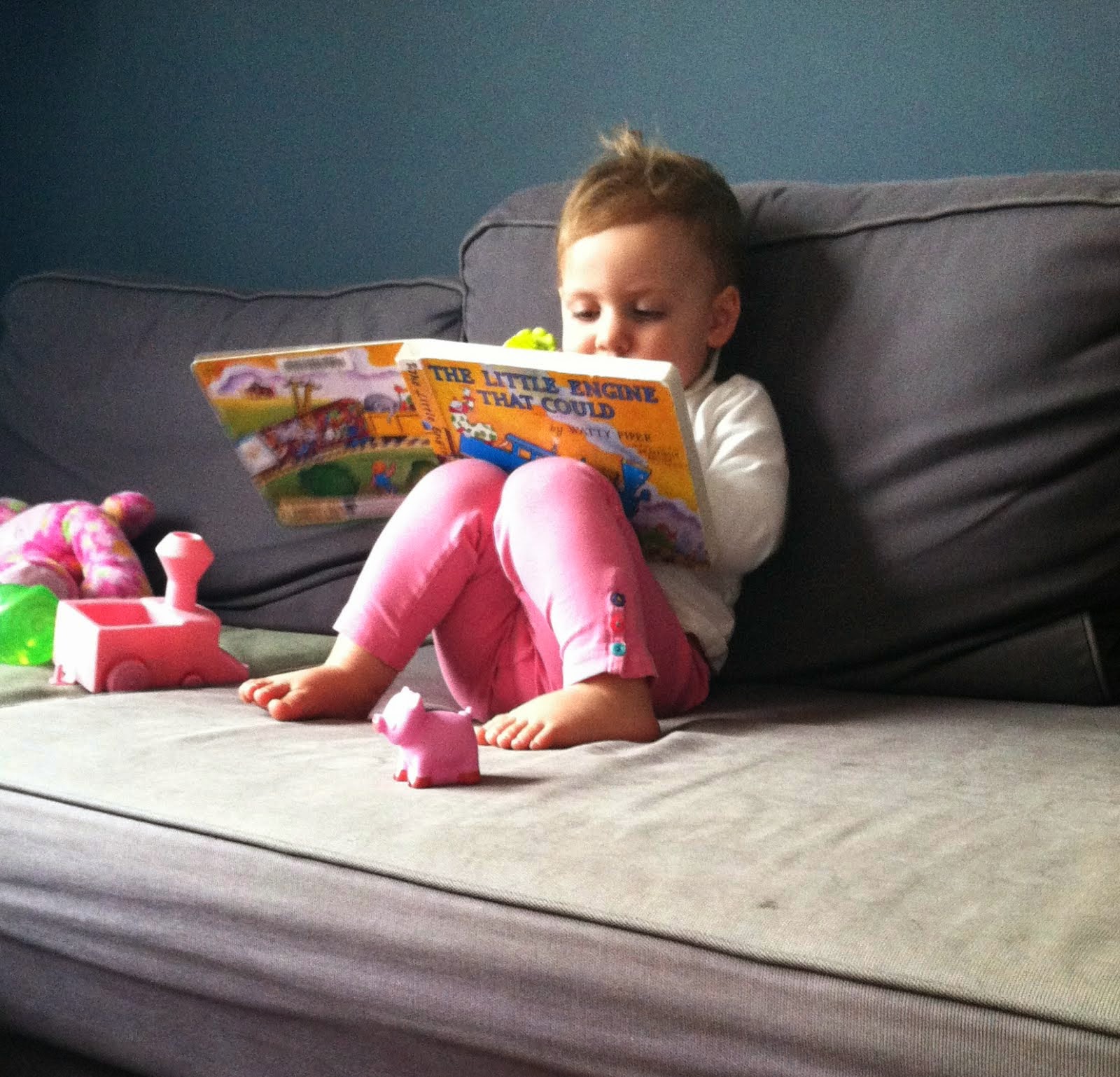 Rose, at one year of age, gets the positive message of a classic book. 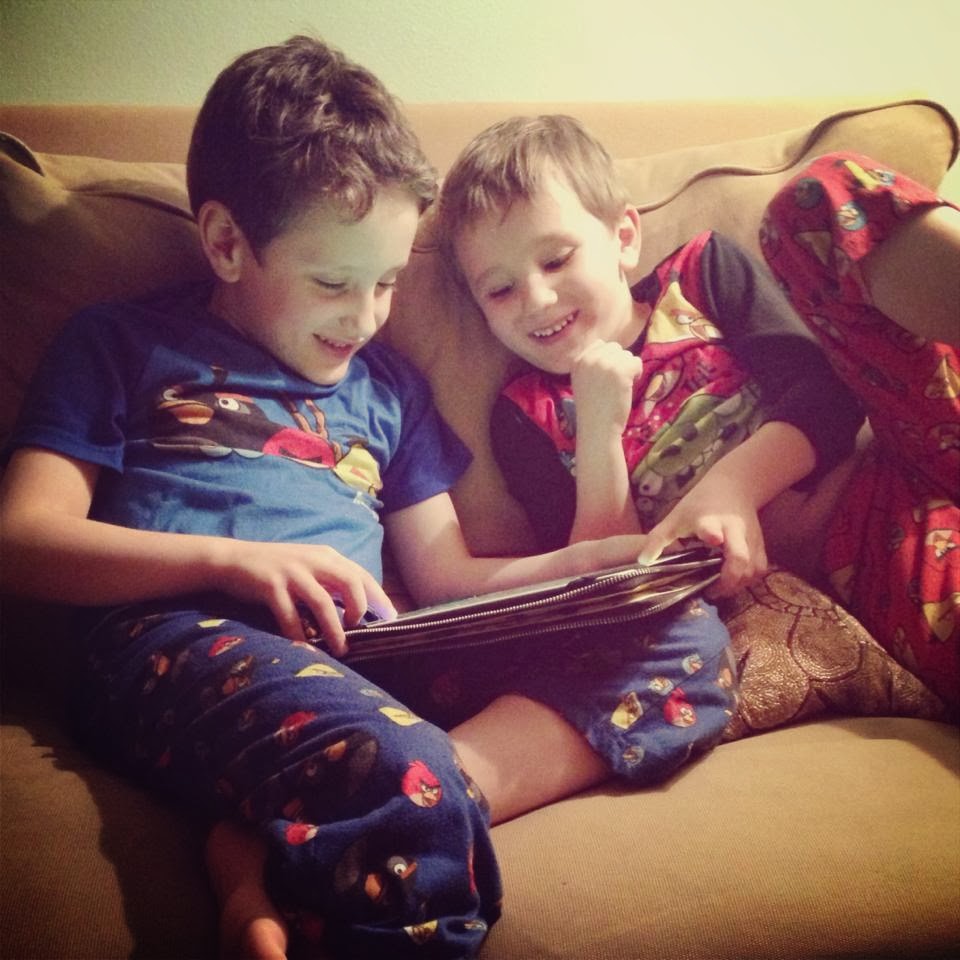 A Girl and Her Book 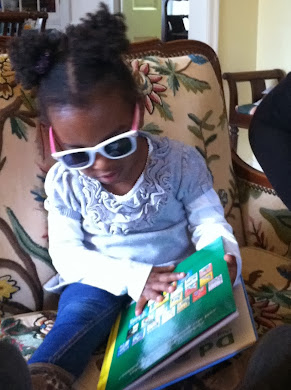 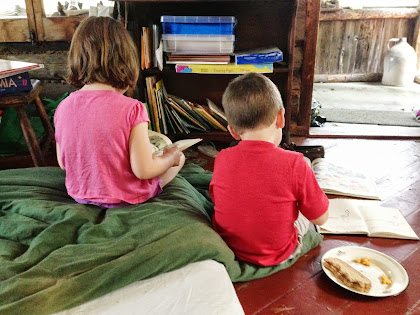 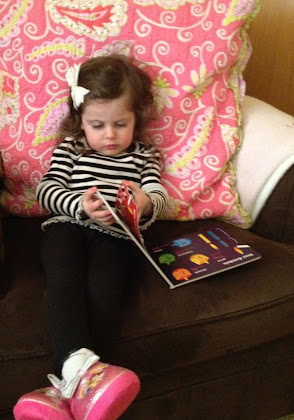 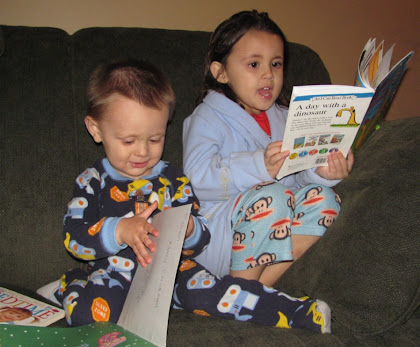 Ryan, 21 months and Sydney, age 4, reading together before bedtime 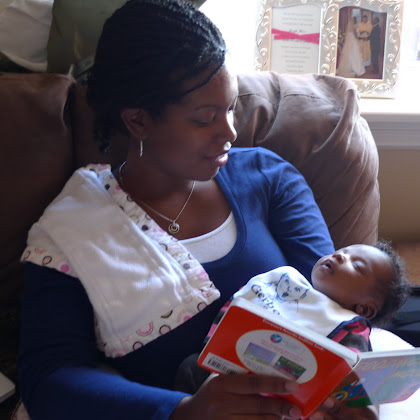 A Boy and His Book 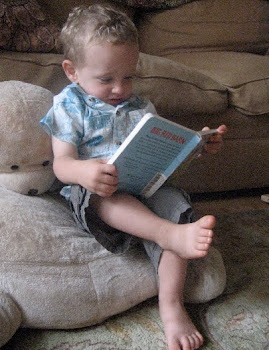 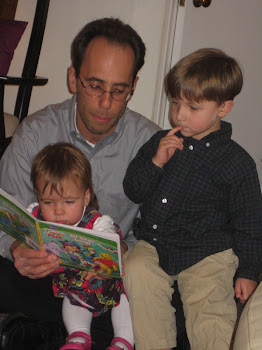 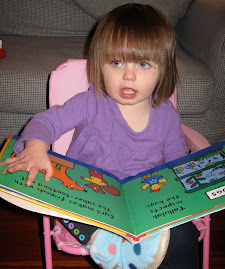 Grab the Mad for Reading Button